The exhibition, called Showcase, displays personal items and instruments from this year’s honourees, including one of Young’s practice guitars – a vintage 1970s Epiphone acoustic – on which he wrote “Natural Beauty,” from his 1992 Harvest Moon album. Other treasures include song books of lyrics for Cockburn’s 1984 political anthem “If I Had a Rocket Launcher,” and 1988’s “If A Tree Falls,” along with a Linda Manzer-built acoustic guitar owned and played by him.

Visitors will also see conga drums owned and played by drummer Réal Desrosiers from Québecois rock band Beau Dommage, and a handwritten note from Quebec songwriter/composer Stéphane Venne, describing his writing process for the song “Un Jour, Un Jour,” which was chosen as the official theme song for Expo 67 in Montréal. 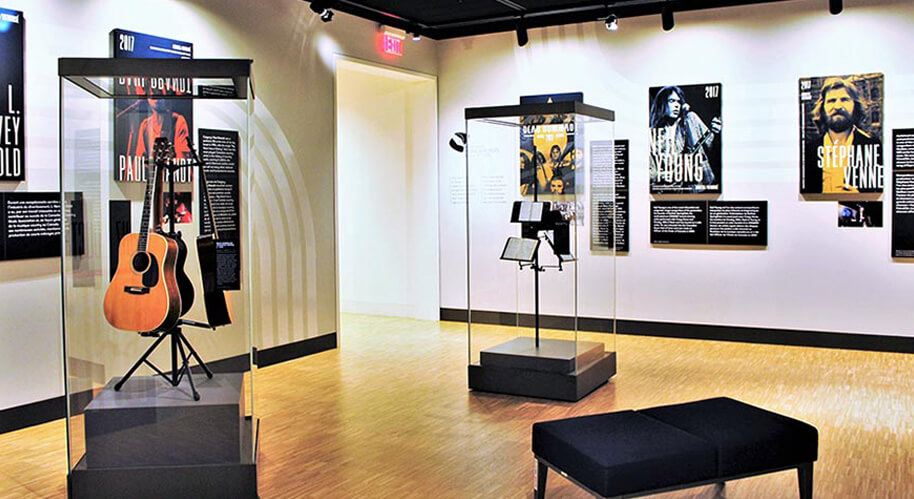 “After an extraordinary tribute to our 2017 inductees at Massey Hall last fall, we’re thrilled to see the celebrations continue with the launch of this exhibition,” said Vanessa Thomas, Executive Director of the Canadian Songwriters Hall of Fame.

Two 2017 Canadian Country Music Hall of Fame inductees, Paul Brandt and Harvey Gold, are also being feted in the exhibition, which will run from Dec. 13, 2017, until the fall of 2018.

Studio Bell, which houses the National Music Centre, is the physical home of both Halls of Fame, as well as a third, the Canadian Music Hall of Fame, all located on level five of the building. This floor is entirely dedicated to celebrating and recognizing Canadian artists that have made a significant contribution to music, nationally and internationally.

Watch: Some of the Best Canadian Performances of the Year

“Hats Off” to Lighthouse: Ralph Cole, Paul Hoffert, Bob McBride, and Skip (Ronald Harry) Prokop, are the Newest Inductees to the Canadian Songwriters Hall of Fame